If you’ve ever met someone from Balkan, you probably haven’t forgotten us. We are loud, we laugh a lot, have extremely sarcastic sense of humour, and in general, we are hard to ignore. We are tough on outside and soft as your favourite childhood teddy bear on the inside. You either love us from the start or can’t stand us, but eventually grow to love us. Either way, here is the list of 10 stereotypical things all Balkan people have in common that will help you to understand us. Or at least entertain you.

We just sound angry, we are not actually angry.

Well, most of the times. Sometimes we are. But in those cases, you will not have to ask us about it, you will pretty much know it. We are loud. As a student, I’ve spent a year abroad, in Poland, with people from all over the world. Every time my Serbian friend and I were talking, someone would carefully approach us and ask if we were fighting, when in reality we were simply discussing boys or hair colours.
Balkan languages do sound a bit harsh, and we are passionate people, so I guess, sometimes you may be confused. But don’t worry, if you don’t see any flying objects, everything’s fine.

2. We think rakija is the cure for everything. 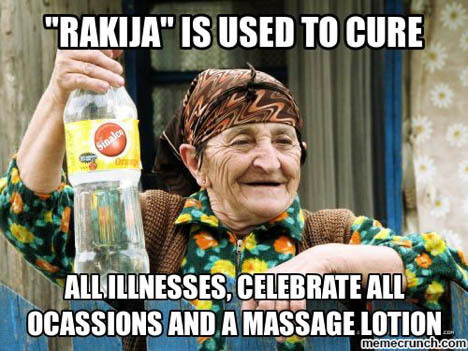 Rakija=the collective term for strong, fruit brandy popular in the Balkans. The most common ones are šljivovica which is made from plum or loza made from grapes.
„Drink some rakija, you will feel better“, is a sentence that every person born in Balkan has heard at least once in their life, and it’s usually told by our grandparents. Good old rakija is considered a national drink and stories about its healing powers are passed from one generation to another.
Whether you were just a kid who has hurt his knee or got bitten by a mosquito, there will always be someone who will tell you – put some rakija on that. The same goes with fever, toothache, sour throat, bad circulation and… basically every problem you have – rakija can fix it. Especially a broken heart.

I guess you are not shocked by this after reading number 2. While it might not be a surprise for you that Balkan men can drink a lot, let me tell you this: an average Balkan woman can outdrink any random European guy. It’s a fact. You can’t win this game, but you can always try.

4. We have some weird traditions.

Every county has its own traditions which can be completely crazy to the rest of the world. And so does Balkan. But maybe ours are just a little bit weirder than yours.
A lot of these weird customs that are still being practised are related to weddings. Weddings in Balkans are big whether you have a lot of money or don’t – it doesn’t matter. People who can’t afford a big wedding will often take a loan.
And if you thought that bride and groom are the „stars“ of the traditional Balkan wedding – you were wrong. The star of the wedding is a person called „barjaktar“ who is in charge of the flag. Yeah, flag. He walks around, waves with a flag all day long and gets guests „in the mood“. Balkan weddings are big, loud and full of funny or weird customs. If you have a chance to go to one- don’t miss it.

5. We have this habit of preserving food for the winter.

Growing local food and keeping it for winter is something a lot of Balkan households (especially in villages) do. Even people who live in the cities where they don’t have opportunity to grow food, will buy it from some local grower and still make their own stashes for winter. We preserve onions, tomatoes, corn and all sorts of vegetables. While „eating organic“might be in fashion now, in Balkans it is a normality.

Croats, being the best football nation in Balkans, are especially proud of their national team which was 3d in the World Cup 1998 and almost won a championship 2018. Although, they lost against France in the finals, they took the title of the second world best nation in football. Quite impressive for such a small country, right?
Football is a national sport, not only in Croatia but in all the other Balkan countries as well, and you can see children, whose dream is one day to become new Luka Modrić, playing it everywhere.

7. We enjoy doing nothing.

Westerners would say this is called procrastination or laziness, we would say-it’s happiness. It’s not that we don’t want or like to work, but we also really appreciate doing nothing at all. For example, we can sit for HOURS on some terrace drinking coffee. Yeah. We just sit there with some friends, sip coffee and do nothing. We take things slowly and don’t really understand the point of all that rat race. Experts in doing nothing are Dalmatians and Montenegrians but you know what they say-time you enjoy wasting is not wasted time.

8. We are proud nations.

To fully understand this you have to dig a bit deeper in the history of the Balkan countries. All of them have been, for a long time persecuted for either confession or ethnicity or both and under many different regimes. Being nationalist was sort of a defensive movement. We are extremely proud of our culture, national heritage, sport achievements, people. One and maybe only thing we equally hate are our politicians.

Balkan women are a tough, brave and strong woman. But if there is one thing our moms and grandmothers are petrified of is this force of nature called “propuh”. Propuh is a simple draught that occurs when two windows in the house are open, so the air goes from one side to another. So, yes, it is wind. But indoor wind! Which in Balkan is, obviously, a massive natural disaster.
Balkan children are raised in fear of propuh because they were taught it can cause all sorts of problems and illnesses such as headache, earache, sore throat, even the full-blown flu. While other countries have hurricanes, tornados, earthquakes, we have a small draught.

10. We love dark and sarcastic humour.

Balkan nations have this specific, dark and sarcastic type of humour which helps us to deal with life and the absurdity of our politics and government. When things get tough, we don’t cry, we laugh about our situation. We appreciate a good laugh in every possible situation.